In recent years, the proportion of air source heat pump systems in home decoration has increased. Due to its multi-purpose, energy saving, environmental protection, long life and stability characteristics, it has been recognized by home improvement users, and installations have also increased. With the in-depth development, all the characteristics of the air source heat pump are reflected. Many people will see large or small water tanks connected together during installation, but they do not know what the role is. Can it be omitted? How much capacity do you need to configure when designing?

What Is A Buffer Water Tank?

The buffer water tank can also be called an energy-saving buffer water tank and an energy storage water tank. It is connected in series with the water pipeline of the air energy system to increase the water capacity in the system and store the cold and heat, which can effectively solve the problems caused by the short system pipeline. Fluctuations in cold and heat and frequent startup of the host can achieve the purpose of saving energy and prolonging the life of the equipment.

The Role Of The Buffer Tank

1.In order to prevent the host from starting and stopping frequently

The air source heat pump system can provide cooling and heating for indoor fan coils, as well as heating for floor heating. Since all water media circulates in the pipeline, when used in floor heating, the water capacity is relatively large, and the equipment can be started and stopped. The time is good, but when it is used in the fan coil unit, the water capacity of the entire air-energy air-conditioning system will be relatively small, and the host will reach the set water temperature within a short period of time, so the host will stop working. When the heat is converted over time, the water temperature rises or falls, and when the temperature probe senses that the water temperature is in the starting condition of the host, it will restart the work, which will cause the host to start frequently, resulting in a waste of electricity and a reduction in the life of the host. . Therefore, after the buffer water tank is installed, the water capacity of the system can be increased and the frequency of the main engine startup can be reduced.

The specific heat of water is very large, and it can store heat for a long time. After the water is heated and cooled, it will take a period of time for the water to become normal temperature. If the water capacity in the entire system is large, the heat and cold stored in the water It will also be more, the system temperature can be maintained for a longer time, and the room can be maintained for a period of time even when it is not heated and not cooled. For example, in the cooling function of the fan coil unit, the fan coil unit can pass the refrigeration in the pipeline The water temperature will continue to deliver cooling capacity to the room, and there will be no problem that the fan coil unit is turned off and the cooling output is stopped immediately. In terms of the heating function of the floor heating, the water temperature stored in the floor heating can also continue to provide heating for 2-3 hours without decreasing. , which is beneficial to the reduction of energy consumption and the improvement of comfort for the entire system, and the indoor temperature will be stable for a longer time. 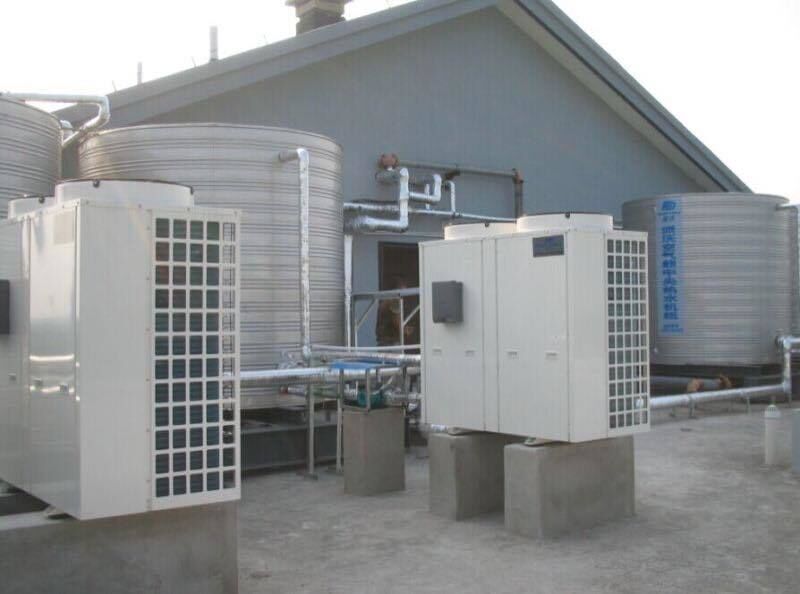 When heating in winter, because the air source heat pump absorbs the low-grade heat of the environment, it needs to discharge a large amount of cold air when the main engine is working. The position of the main engine is the same as that of ordinary air conditioners, and there will be a defrosting process and the length of defrosting time. Affects the indoor temperature fluctuation, which affects the continuous heating of the room. The host needs to consume the heat in the system when defrosting. If the amount of water in the entire pipeline system is too small, the amount of heat carried will not be much. After the host consumes heat, the water temperature in the entire system pipeline will decrease, affecting the indoor heating temperature. If a buffer water tank is added, there will be enough water and temperature stored in the water tank. When the host encounters defrosting, the water in the tank will It can speed up the defrosting time and consume less heat at the end of the room, which can avoid the host defrosting and cause the water temperature to drop too much and cause the water temperature to fluctuate greatly, which will have an impact on the thermal stability of the system. heating.

The water we inject into the air energy pipeline has a certain capacity, and the water also contains a certain amount of air. The air in the water will cause air blockage in the pipeline, which will affect the water flow speed and the heat and cooling dissipation in the system. A buffer water tank is added to the system. The circulating water in the system enters from the upper part of the water tank and flows out from the lower part. The air in the water will go upstream and be discharged from the exhaust valve on the upper part of the water tank, so that there will be no water entering the pipeline again. Air, the impeller in the water pump will not be idling, and there will be no air blockage at the corner of the pipeline, which can also ensure the normal transmission of heat and cooling at the end of the room. Of course, if the buffer water tank is not added, the coupling tank can also be used to solve the problem of the water pump. Idling and exhaust problems, but it is prone to problems such as elegant alarms of the host and an increase in the failure rate of flow switches.

5.It is easier to discharge sewage and reduce the blockage of impurities in the system

We all know that the water quality varies from place to place, and the content of calcium and magnesium ions in the water is different, which will also lead to different hardness, and the resulting scale content will also be different. In the later maintenance and maintenance of the system, the impurities and scale deposited in the water can easily block the pipes and parts and equipment during the circulation process. If a buffer water tank is added, these impurities will circulate and deposit to the bottom of the water tank. At the same time, the impurities in the water will no longer be circulated to the water pump and the pipeline with the water flow, thereby reducing the blockage of the system by impurities, and also reducing the probability of blockage of small-diameter equipment. After the installation, the water quality can become better, which is also beneficial to the whole system, but it is necessary to increase the investment in water purification equipment.

The role of the buffer tank
Previous： What is an inverter pool heat pump?
Next： Can a heat pump freeze up? How to prevent the air source heat pump from freezing in winter?